Each fall, the Eph Jensen Livestock Company takes two full days to trail their sheep over twenty miles from summer country in the mountains near the Cache and Weber County border to Corrine, and then ultimately to their winter ground near Bear River City. 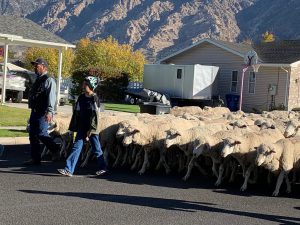 This October 15th marked their 93rd Annual Trailing of the Sheep. Before sunrise on this day, Utah’s Commissioner of Agriculture Logan Wilde met with Lane Jensen and his family, along with a PBS documentary crew and a herd of sheep that have walked the same trail between high mountain pastures to their winter range for generations.

“I’m so pleased to see the media’s interest in families like the Jensens, who play such a critical role in the stewardship of our natural resources” said Commissioner Wilde later in the morning as he and his wife Kim watched the Jensen sheep march down Main Street in Brigham City. “The way some of us move our sheep today may be different from our ancestors, but the quality of our lamb in the Intermountain West still reflects the care and commitment families like this have for their animals, the land they live and work on, and the communities they support”

While most sheep ranchers, commonly called woolgrowers, have been forced to truck their sheep between summer and winter range, Lane Jensen continues this tradition in honor of his grandfather Eph.  Referring to his grandfather, Lane says, “My grandfather came to love raising sheep after taking a job with his cousin shortly after being discharged from the military.  Grandfather learned the art of buying and selling livestock before investing in rangeland and a herd of sheep, but his hope was always to pass that love down to his family. It worked. I love running sheep with my family, and I want people to know the history of this area, and this industry.” 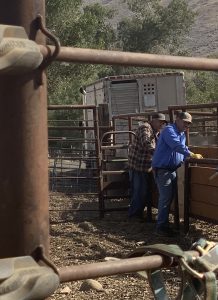 Since the settlement of Cedar City in 1851, livestock has been a big part of the area’s economy. Sheep became the dominant animal raised along Cedar Mountain due to forage that was much better suited to sheep than cattle. Larkspur (Delphinium barbeyi) is highly toxic to cattle but well tolerated by sheep.

Caroline Nelson Howe’s family started ranching in Iron County around 1860. Brigham Young sent her great-great-grandfather, Bengt Nelson, a Swedish bricklayer to what was then called the “Iron Mission.”  The people Bengt laid bricks for didn’t have money to pay for his work, so they paid him in-kind with  sheep.  “Sheep were an extremely important commodity to early settlers,” Caroline says, “as they were small and easy to work with, and provided both meat and fiber for clothing.”

Despite increased development around the Cedar City area, a number of local herds still use the designated sheep trail to Cedar Mountain both spring and fall, while others trail only in the fall as the steep trail is difficult for young lambs.  Ranchers sell their fat lambs off the mountain in September and bring their ewes down to breed on farms near Cedar City in October. In December the ewes move out to winter range on western Utah and Arizona deserts.

Stoney and Heidi Clark Burningham grilling lamb burgers at the 2020 Cedar City Heritage Festival (left). Three generations of the Nelson family “Lady Woolgrowers” (right). The Cedar City Woolgrower’s Auxiliary started cooking lamb burgers at the old Stock Barn on Main Street in 1974 to raise money for community events and to help the youth buy lambs in order to start their own sheep herds.

While many Utahns aren’t directly involved in production agriculture, there is a growing interest in staying connected to the people and culture behind local food.  Rural communities such as Brigham City and Cedar City are not only attracting visitors to their hotels and restaurants, they are supporting family farms and ranches while preserving and celebrating the living history of the trailing of the sheep.

“The Cedar City Heritage Festival has been a tremendous success since it’s very first year” says Danny Stewart, Cedar City’s economic development director. “Cedar City is grateful to the organizers and volunteers who work so hard to put on an unforgettable event year after year. As you drive through the town, you will see dozens of spectacularly-decorated sheep, and people from far and wide who travel here each year to take part in this amazing event.”