Delicious, creamy, ultimate Ranch Dressing with a kick.  Just spicy enough that everyone can enjoy.  Our Ranch is not only great on salad, but transforms into a dip for just about anything!  From chicken strips and pizza to quesidillas and taquitios, drizzle on nachos, tacos, veggies, sandwiches-it goes with everything except ice cream!

Big T’s Ranch is the best ranch in the world!  You will find you can’t live without it once you have it in your fridge.  Friends call in a panic when they run out knowing their kids will be asking for it the second dinner starts, and every time in between!  Our kids have consumed  more vegetables now than ever before. 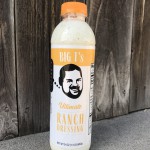 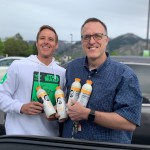 It all started out as most dreams do…just a dream.  I owned a restaurant, where our dressing stood out as the best around.  People would order my ranch to go on everything!  I had a couple Food Trucks, where the dressing would be on the menu, and would sell out every day.  I ran the catering and concessions for an Event Center, and Big T’s Ranch was a hit once more.   At each catering job, people would tell me I should bottle my ranch, because they wanted to take it home.

So I did!  Ranch bottled, I started out giving it for Christmas presents to family and friends.  Then they started asking for more because their friend had it at a BBQ, and wondered where they got it.  Soon people I didn’t even know were calling asking about the Ranch.

I approached a local milk delivery company that I had for years-they had a lot of locally owned and produced product, and I thought they might want to add it to their product list.  They did, and the Ranch grew.

Next, the grocery store.  I gave them some Big T’s Ranch to try.  They joined the fan group, and wanted their customers to also have access to a delicious, local, and fresh addition to their family meals.

I never thought that I would be selling something that I made…I created Big T’s Ranch because it put smiles on faces and helped friends eat their veggies.  But here it is…straight from my heart and available to families everywhere!  So my dream became a reality-improving lives one bottle at a time.