All of our pork sausages are made from only the finest cuts of pork. We use the pork shoulder commonly referred to as the Boston Butt. We make sausage on purpose and we never use off-cuts or trim product. Our sausages are made daily in our inspected facilities in West Jordan, Utah. Colosimo’s makes over 25 kinds of sausages. Some of our more popular flavors include: Mild Italian, Hot Italian, Bratwurst, Polish, Cajun, and Tuscan Red Wine.

Really really good sausage.. the only ones my husband will eat anymore.. 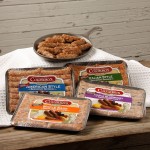 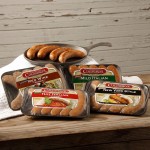 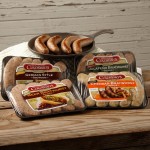 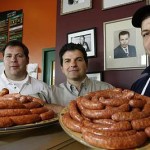 A Colosimo has been making sausage in this country for over eighty years. How many years before that in Italy no one knows for sure and that fact is probably lost to history. We do know Ralph Colosimo came alone to America in 1921 with the common hope of many immigrants that this country would be his land of opportunity. Ralph carried little in his pocket, but what was in his head was the recipe on how to prepare, season and create Italian sausage. One thing was sure, it wasn’t written down anywhere. Grandpa Ralph, like many great chiefs, would season food by how he felt, or how it tasted, or his memories of how the sausage was prepared when he was a little boy during those warm summer days in Calabria, Italy. Each year the men in the town would make great plans to butcher the hogs, prepare the meat and make the sausage for their families and for the people of Calabria. At night they would cook their creations and people would come from miles around to smell, to taste, to savor! (Grandpa Ralph’s original Italian sausage can be found at Colosimo’s today!)