Wriggles bakes fresh, healthy flatbread using Utah flour with no preservatives, additives, lard, or shortening. Then we use the 140-calorie flatbreads to hand make delicious rolled sandwiches with high quality meats that are shredded and cooked in house. All of our ingredients are natural and low fat, and we make vegetarian and vegan options using our homemade hummus.

Baking our flatbread in front of our customers lets them know everything is fresh and made just for them. It also shares the mouth-watering aroma of homemade bread right out of the oven. Stop in for a custom made breakfast or deli sandwich, and we’ll make it to order. 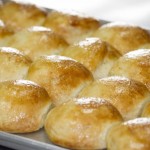 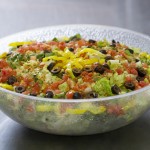 Jack Kaleel started baking flatbread in 1974. He decided to manufacture and engineer one of the first traveling ovens ever to be built. Then set off to create a recipe for making the healthy flatbread that he grew up on. He put the flatbread into supermarkets and sold the flatbread through a distributor. He then went on to make and distribute roll-up sandwiches, but in 1984 his oven caught fire and he closed the business.

Jack’s son, Mike Kaleel, wanted to revive the flatbread concept, so he and his dad decided to build a new compacted oven that would allow them to bake the bread in front of customers. In 2003, we opened Wriggles inside the University of Phoenix building, serving the fresh rolled sandwiches dad made all those years ago. They are still loved just as much today.